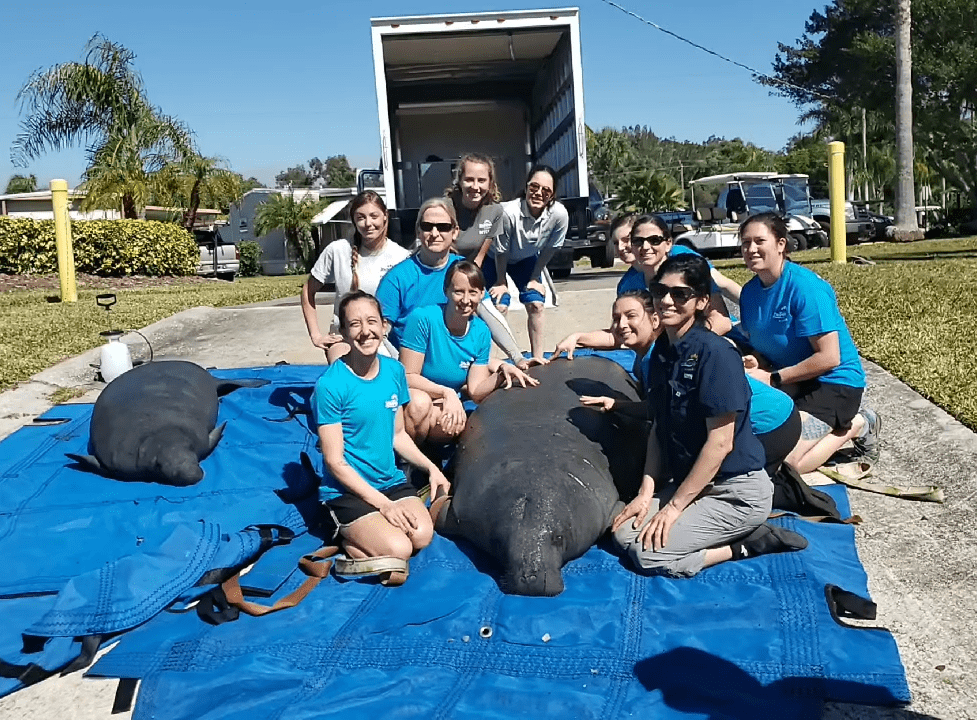 TAMPA, FL. (January 30, 2020) — After a long journey back to health, two of ZooTampa’s rehabilitated manatee patients were released back to Florida waters yesterday. The duo, Fern and her dependent calf, Wilbur, came to ZooTampa’s David A. Straz Jr. Manatee Critical Care Center last May following a boat strike that caused severe injuries. When Fern arrived at the Zoo, she was suffering from broken ribs and a pneumothorax (air in her chest cavity). Due to her injuries, she was buoyant on the water’s surface and unable to submerge to get food.

While in the care of ZooTampa’s medical and animal care team, led by Staff Veterinarian Dr. Lauren Smith, Fern received around-the-clock fluids and medications to keep her stable and comfortable. While Wilbur was able to eat the greens he needed and stay close to mom, the team worked tirelessly for almost two months on getting Fern to eat. By the end of the summer, she was finally showing signs of improvement and has spent the last six months gaining her strength, eating over 100 lbs. of produce daily.

Fern and Wilbur’s journey culminates today as the duo, named after characters from the book Charlotte’s Web, were returned to their home waters of Charlotte County. Manatees face increasing dangers including boat strikes which have been escalating to record levels. Other factors affecting wild manatee populations include habitat degradation, entanglements, cold water stress and red tide blooms.

ZooTampa is a leader in wildlife conservation in Florida and throughout the world. As one of only four manatee critical care and rehabilitation centers in the United States, ZooTampa has cared for more than 430 injured, sick and orphaned manatees. A dedicated team of animal care and veterinary staff tend to the manatees 24 hours a day, 7 days a week.

Our state-of-the-art David A Straz Jr Manatee Critical Care Center is currently home to 16 patients brought in for rehabilitation and care.

ZooTampa at Lowry Park is operated by the Lowry Park Zoological Society, an independent 501(c)(3) charitable organization committed to excellence in conservation, education, recreation and research. The Zoo is accredited by the Association of Zoos and Aquariums (AZA) and is featured among the “Top 25 Zoos in the U.S” by TripAdvisor (2015). The Zoo is located at 1101 W. Sligh Avenue in Tampa, and is open seven days a week, from 9:30 a.m. to 5 p.m. with extended hours for select events. Parking is free. For more, visit www.zootampa.org . Also, find the Zoo on Facebook, Instagram and Twitter.